Looking for street art in Amsterdam

Anyone looking for their Street Art and graffiti fix in Amsterdam can always go to a few well-known places - the walls of the NDSM site in Noord, the viaduct on the Flevoparkweg or the more permanent, freshly sprayed almost daily. street art murals of the RUA project in the Bijlmer, the “If Walls Could Speak” giants in East and the open-air museum of SAMA in New West.

If you know what you're looking for and know a little bit about modern city history, you can move around Amsterdam like a true graffiti archaeologist and uncover the hidden street-art gems.

The origin of graffiti in Amsterdam

But the 'old-school' graffiti lover knows that the street art in a city or neighborhood does not only consist of 'great works', but primarily of tags, throw-ups, pieces and stencils. That is certainly the case with graffiti and street art in Amsterdam.

This art form, originating from New York and Philadelphia in the 70s, was very quickly adopted in our capital. Around the year 1975, when a number of major urban renewal projects are being developed in the city, the first signs of this appear graffiti on the walls. 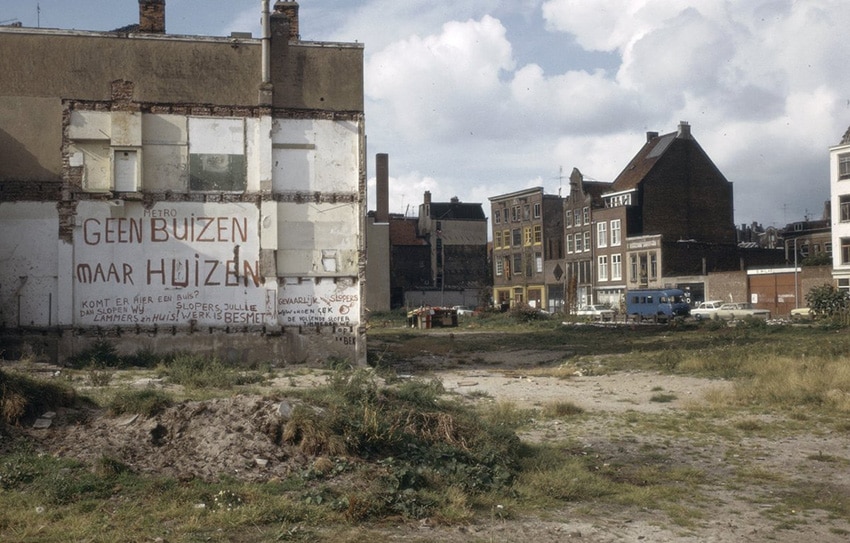 Amsterdam “no pipes but houses”

Nieuwmarktbuurt and the anti-squat and punk movement

During the construction of the metro pipes under the Nieuwmarkt area in the center of the city, ravaged by the hammer, protest slogans appear on the remains of the demolition work. And not much later, the 'names' of the now legendary Dr. Rat, De Zoot and Vendex, hailing from the anti-squat and punk movement, emerge.

In the old, closed pedestrian tunnels below it mr. Fisherman's Square, where nowadays the indoor playground TunFun is located, traces of this can still be found. The place was unique in the city because it was a kind of closed off no man's land, where after some climbing skills you had a work floor with lots of wall space.

In the mid-80s, graffiti began to focus more on New York design. Own styles were created, with specific colors and lettering, and a real one developed street art. Art in which you were not taught your skills through an institutionalized academy, but through practice and innate talent made it into your repertoire through the street. 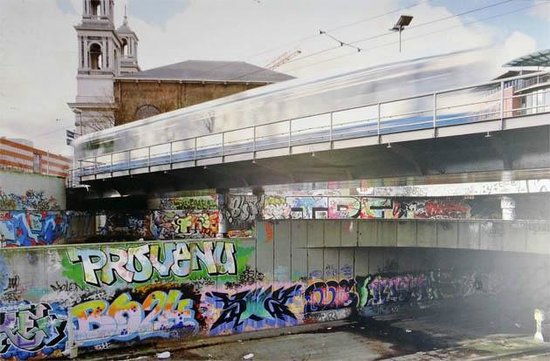 Mr. Visserplein and the pioneers of the 80s

This new generation of 'writers' included Shoe, Delta and Joker, who were one of the first to expand his pieces with 'graffiti characters'. Not only in the closed spaces of the 'TunFun', but also in other places in the city traces of that past can be found. If you know what you're looking for and know a little bit about modern city history, you can feel like a true graffiti archaeologist move through Amsterdam and emerge hidden gems. Please note: for a number of works you need binoculars, boat or paddle board!

From the early days of Shoe (which is still active) there are two more in Amsterdam Tags to find. The first is located on the side of a bridge between a number of willows in the Beatrixpark. Due to the green protective color of the spray paint, the graffiti is not very noticeable, which probably increased the chances of survival of the tag.

Only when you sail or paddle close to it do you see the half-faded letters of 'Shoe' looming up next to those of another legend, 'Dr. Air'. The second vintage 'Shoe' is located on the Jaagpad, under a viaduct of the A10. It dates from 86 and is now accompanied by tags of newer generations, creating a kind of cluster. 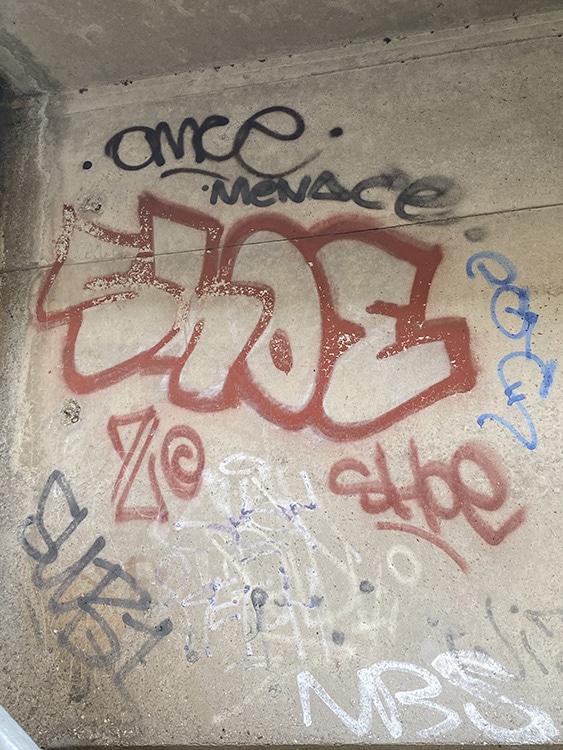 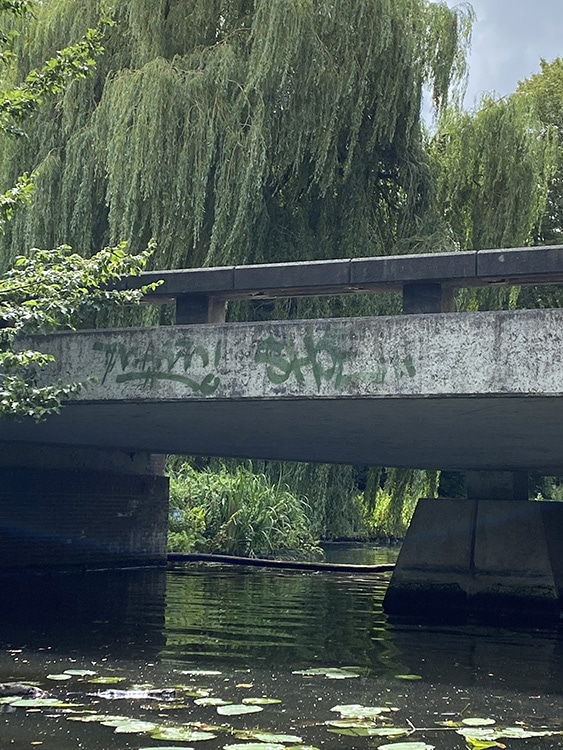 Such to the layman less known 'graffiti spots'can be found in all areas of the city. For example, in the center there are a number of alleys that are sufficient from top to bottom with tags, figures or a single piece.

One of these narrow alleys in the heart of Amsterdam is the Korte Korsjespoortsteeg. The raw wall with chipped plaster makes you feel a bit like you are in New York are. Names such as Ketch, Pak and Omce stand next to new attempts and remnants of an old facade advertisement.

A number of street corners in Amsterdam Oud-Zuid seem a bit more organized. Here too, tags adorn the wall, Again, Omce, Nuke, Zys, Une, ZK, Aize to name a few. These meeting corners are reminiscent of the walls of the XNUMXs, when almost every corner of every street looked like this. It is also remarkable that the international one graffiti artists, such as Christian Guemy - aka C215, know how to find these places and do not hesitate to leave something behind. 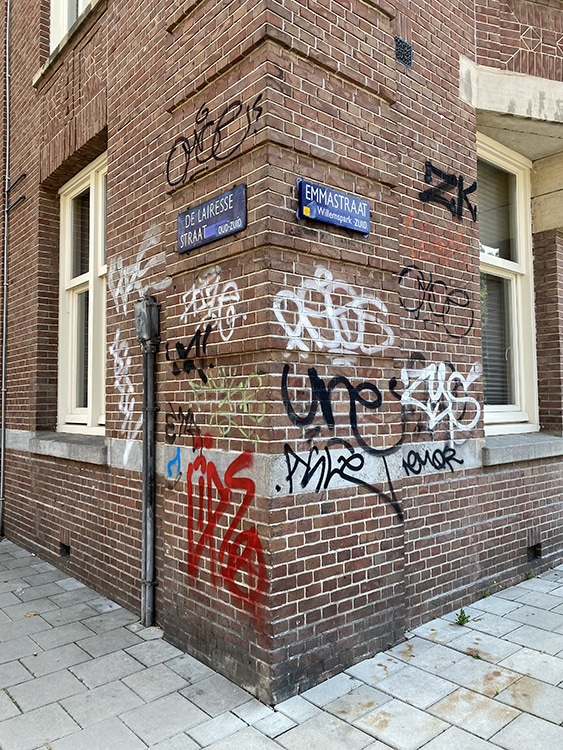 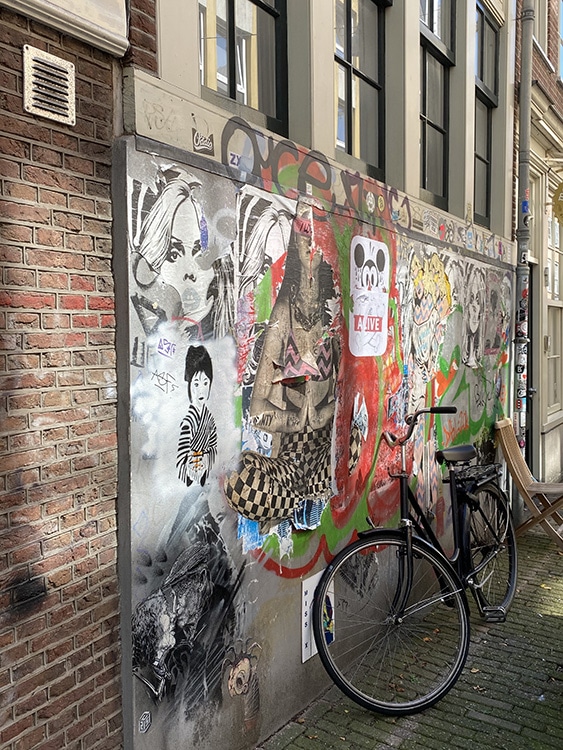 Street art along the Amsterdam canals

In addition to the alleys and street corners, walls along the canals form a beautiful surface for graffiti and street-art. Work by well-known and anonymous writers and artists can be seen under various bridges and along a number of quays.

A recent example is the AGAIN and OMCE 'blockbuster' along the Amstel. This is one of an old-fashioned impertinence. The simple, but very distinctive letters pop off the quay wall. This is what a 'blockbuster'must be: the letters are large, sleek, with few details, and therefore readable from a kilometer away.

A bit older is the work of 'Carlos' on the Ruysdaelkade: the letters are already quite worn out but still reflect beautifully in the water of the canal. The same applies to the monkey head of the English legends Mighty Monkey and Sweet Toof on the Reijnier Vinkeleskade near Beethovenstraat.

The sleeping Smurf from Street art Frankey on the quay wall of the Korte Marnixkade and the lesser known and only for the very observant graffiti spotter visible Cheeky Monkey, under different bridges of the Stadionkade, belong to the same category. 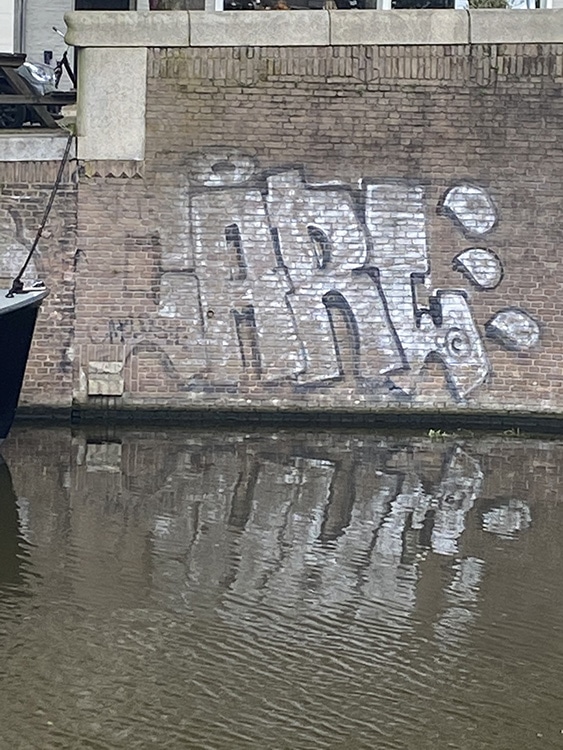 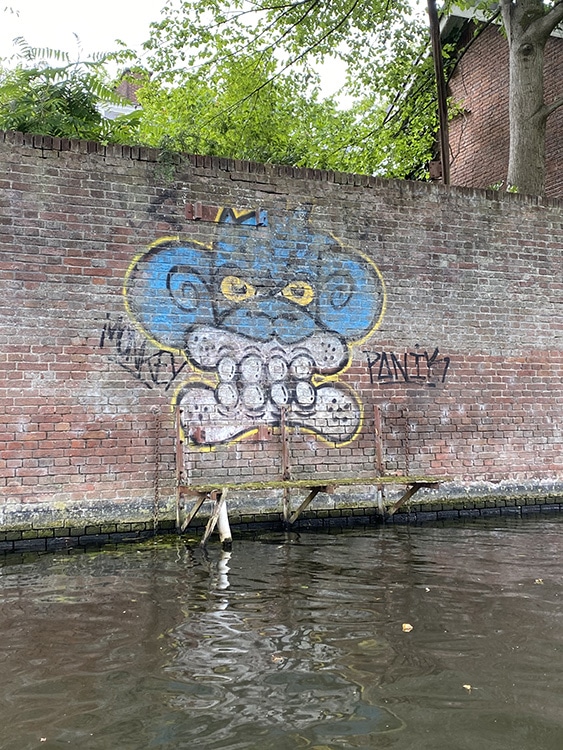 Besides the work of the old superheroes and the new generations building on them street art artists another trend is becoming increasingly noticeable… we are seeing more and more engaged slogans on walls and streets. It is a genre that owes a lot to Laser 3.14 - ubiquitous on the fences of Amsterdam construction sites.

Sometimes a 'background story' on Instagram is used to support the critical, somewhat cryptic texts. The work of Ambrien Moeniralam and Hans de Tweede are examples of this. The transient, chalked texts of Cat Calls of Amsterdam (Ambrien) refer to expressions of street intimidation at the exact location of the incident.

The slogans on the pavement, written in pastel shades, confront the curious reader with brutal words, increasing awareness of street intimidation, as it were. With his 'Save the Curl like Tim', Hans de Tweede refers to the disappearance of the puddle curl from the Amsterdam street scene. Also tags from Rumoer (anti-everything) and NotoiR have something raw in execution and therefore tie in with the written slogans from the very beginning of the graffiti in Amsterdam. 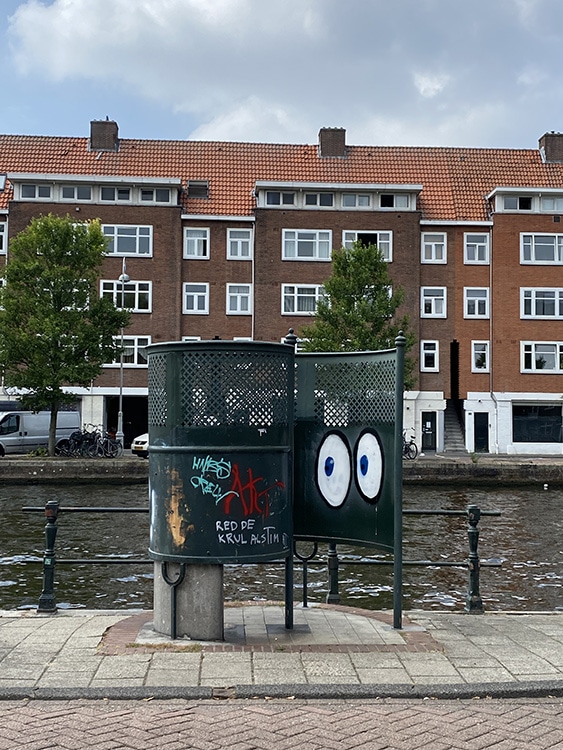 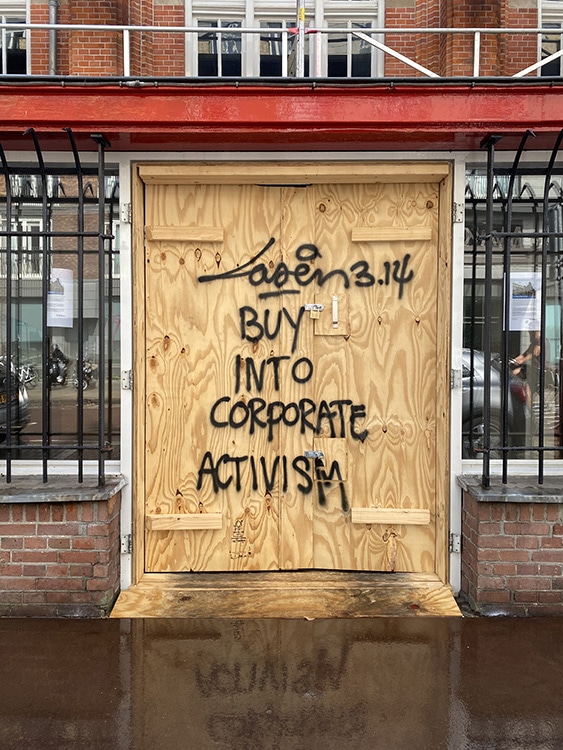 The further development of street art and graffiti in Amsterdam

How will the graffiti and street art in Amsterdam develop in the near future? In any case, a number of trends will continue: committed, humorous, demarcating and purely aesthetic work will continue to grow, but enriched with new techniques, including projection in particular.

The museums will have a difficult time in the near future and the open air offers inexhaustible possibilities. We will use tags, stencils, throw-ups, murals and other forms of Street Art and graffiti continue to be seen in the city, but when it comes to replacement exhibition space, large projections offer possibilities.

We are already used to viewing enormous works from a distance and the covid crisis will cause museums to look for new challenges. Think of street projections that transform entire neighborhoods into a huge exhibition space. A digital Wynwood in Amsterdam, I'm in favor!

Not yet finished reading about street art? Check out this one too blog messages: The murals of Heerlen as a large open-air museum, Murals, tags and street art in Utrecht of Street Art in Rotterdam, from the past to the present.

Do you have any questions or would you like to know more about street art?

Do you have questions, comments or suggestions about street art and graffiti in Amsterdam? Want to know more about the history, commissioned one have graffiti made or get started yourself during a graffiti workshop in Amsterdam? Please feel free to contact one of our specialists.

Graffitinetwerk specializes in all conceivable forms of graffiti, street art and guerrilla marketing. Since 1990 we have been providing team building workshops and creative (side) entertainment, colorful murals, (3d) street paintings, live art and high-profile street advertising campaigns throughout Europe.
Take a look at us for inspiration portfolio and for information, advice or a quotation without obligation contact us with us.

By customers & partners Graffitinetwerk and rated its services with a 9,1 (831 reviews).