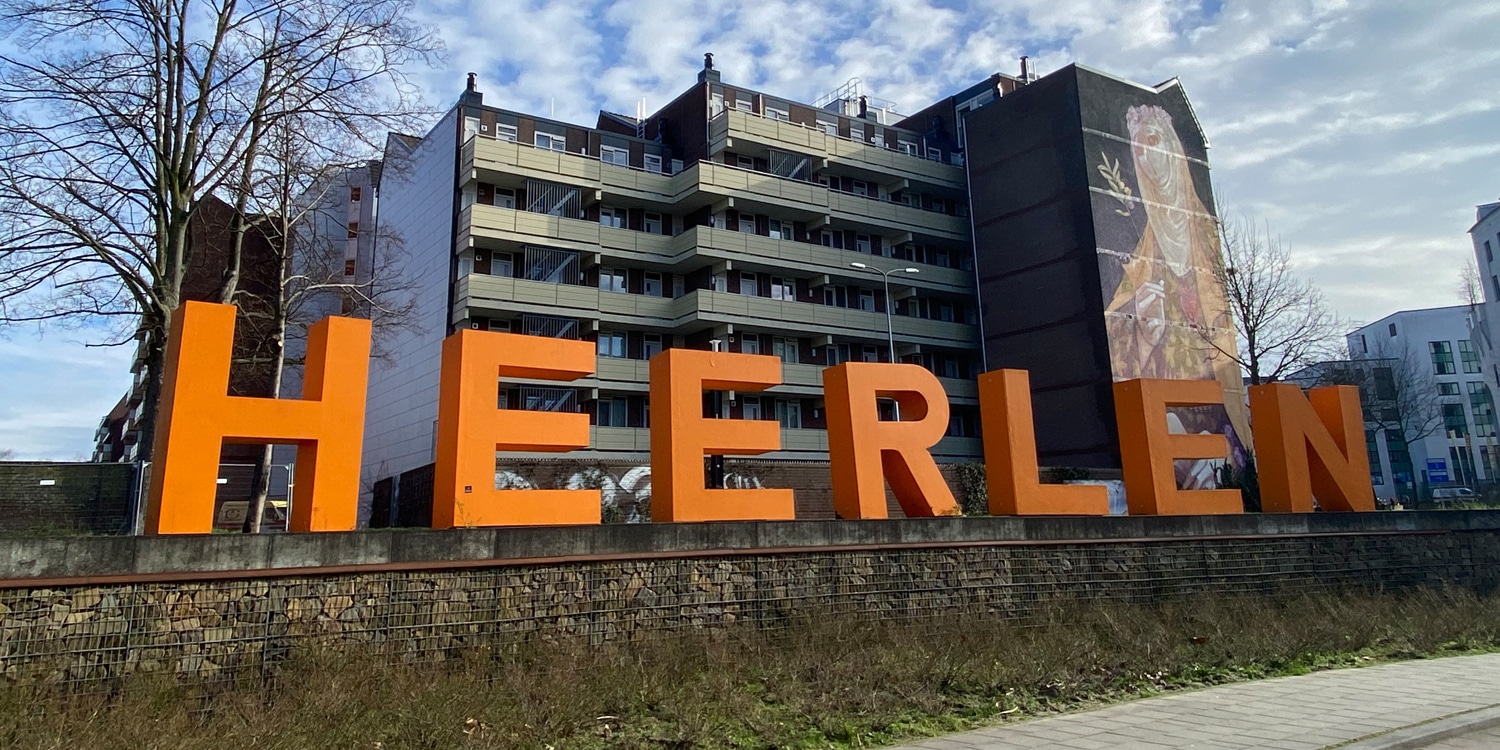 While much of the world is slowing down and museums are closed with some regularity, art in public space is taking on an increasingly important role. Graffiti artists, street artists and 'muralists' are using their art forms to express beauty, support and dissent, especially during the COVID-19 pandemic.

Also in Heerlen, where a street art artist on the Spoorsingel portrays a nurse during her shift. According to the artist herself, the young woman, a tear in her left eye and a mask in front of her mouth, raises the following questions in the viewer: 'Does she take off her face mask, is it over? Or is this just the beginning?'

With dozens of murals by both national and international street art artists, Heerlen has been turned into a large open-air museum.

Heerlen has a great Street Art tradition that is closely intertwined with the history of the city. Apart from the fact that a number of 'murals' refer directly to this past, Heerlen's status of mural-capital of the Netherlands is inextricably linked to it. It is a conscious municipal policy to give Street art and Urban Art forms plenty of space to make the city shine again.

The Americans and the Koelpiet

Heerlen has had its share of setbacks. After the mine closures, it was overrun by mass unemployment, and on top of that came a huge hard drug problem. In the 60s/70s, the site of the Hendrik State Mine in Brunssum was transformed into a NATO base and then a command center for the defense of Europe against the Soviet threat.

The combination of economic malaise and the presence of large numbers of traumatized and addicted Vietnam veterans resulted in a lively heroin trade in this border area. Heerlen grew into a drug city where theft and burglaries were commonplace and where heroin prostitution was rampant. The station acted as an international drug trade center for drug tourists from Germany, Belgium and France, causing the surrounding area to become extremely impoverished.

After decades of crisis, this desolate setting – a deserted city center full of vacancy – has been transformed into an attractive art city. The station area has been refurbished and drug crime has decreased. Dark tunnels have made way for new architecture and the city center is partly thanks to the Street Art revived. 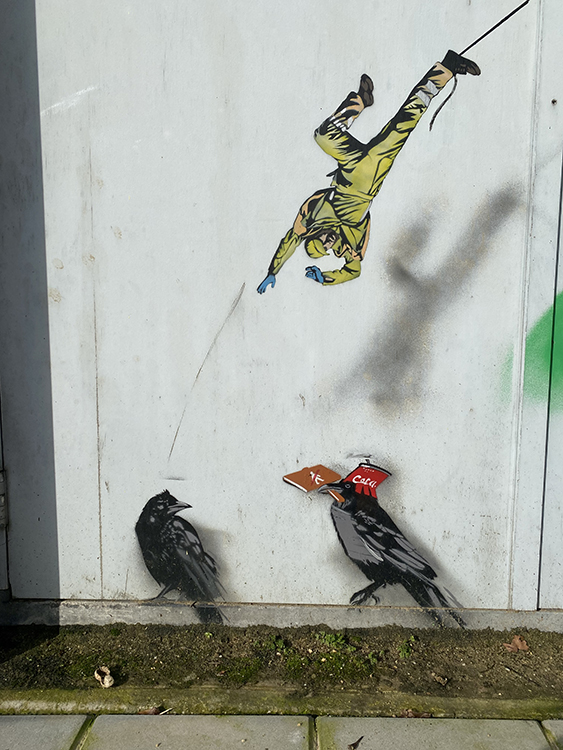 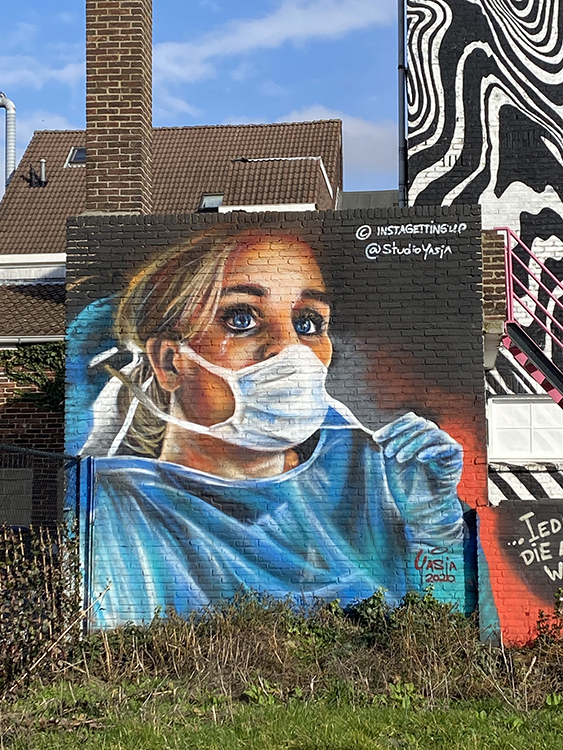 Free as a bird 'Heerlen Heron'

Heerlen was eventually scrambled to his feet. A very apt representation of this is the 'Heerlen Heron' by artists Dave de Leeuw and Vincent Lancee. When you enter the city by train you are welcomed by this huge mural of a heron.

The painting celebrates the positive developments that the city has undergone in recent years, instead of pointing out a past of mine closures, vacancy and (drug) nuisance). The phoenix rises from the remains of a closed past that is symbolized by all kinds of recognizable objects.

You can see a cross that, according to the makers, refers to the Catholic past of the south, a sausage sandwich from nearby Aachen, toys, an old-fashioned telephone with a fixed cord, a skull and of course a mining cart. One of the most remarkable elements of the huge wall painting in black and white is that no aerosol was used. The entire wall is painted with paint and brush. 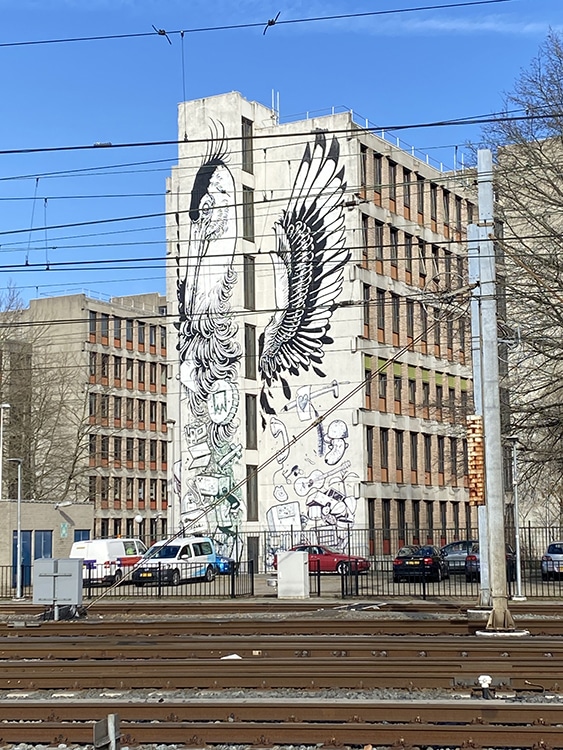 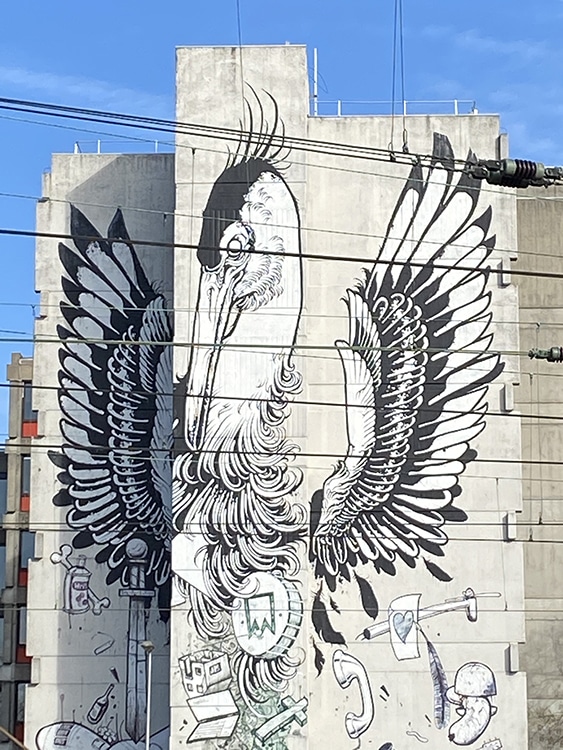 Another bird that regularly appears in the city is the crow (or raven) of the versatile performer DAZETWO. His black birds react to life around them in a rebellious, musical, committed way and create unexpected scenes in the streets. You can find them all over Heerlen, in the form of small paste-ups or performances in three-dimensional form.

DAZETWO's larger work is made with spray paint and he claims to have left over two hundred in the city. He says of the birds on the chessboard in the image below: 'Either you are free as a bird or you have to work hard to get out of the system.' According to him, the system is constructed in such a way that we, individuals, are always 'checkmate'. 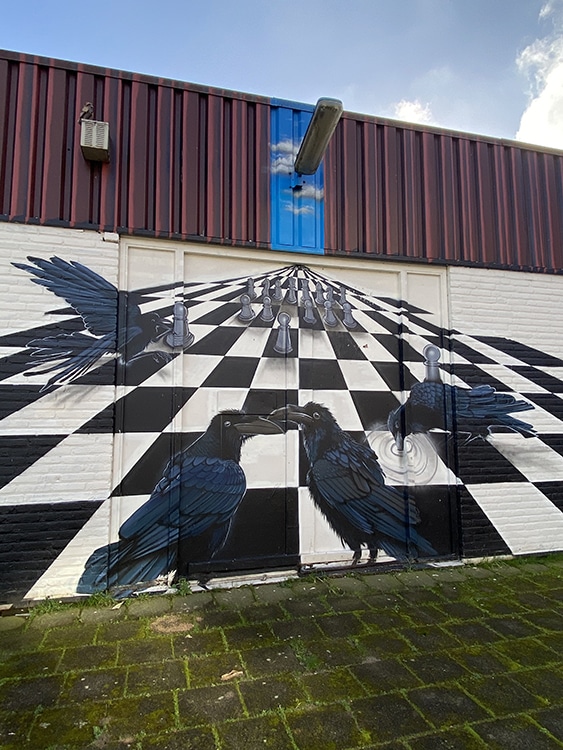 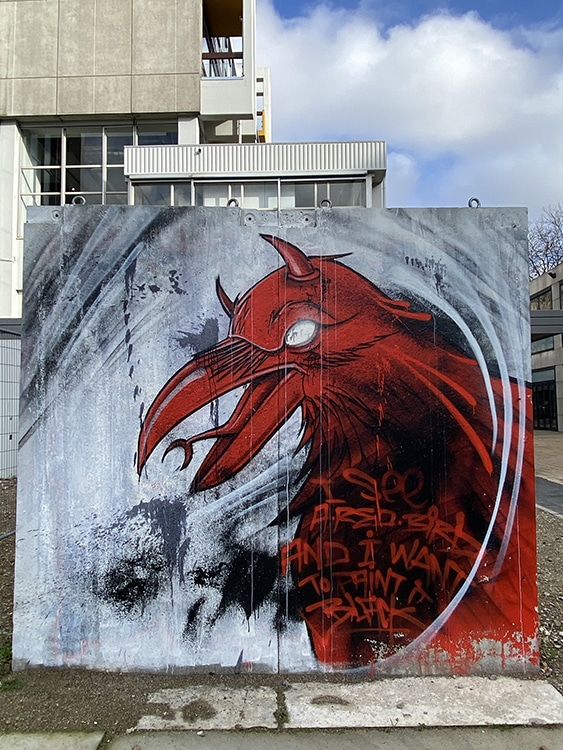 Mural capital of the Netherlands

Heerlen is, as said, the unofficial mural capital of the Netherlands. Paintings by Dutch celebrities such as Bier en Brood (Jelmer Noordeman and Koen Harmsma) are interspersed with those of international heroes.

The work 'Synthesis' by Beer and Bread is several years old but still stands spic and span along the track. The subject of the painting – with its recognizable black and white lines and almost psychedelic design – is not outdated and is even very topical at the moment.

'Synthesis' is about the digitization of society and how people seem to have grown together with all kinds of devices. At a time when most of us are forced to work from home and a lot of screen time due to the pandemic, that's quite recognizable. 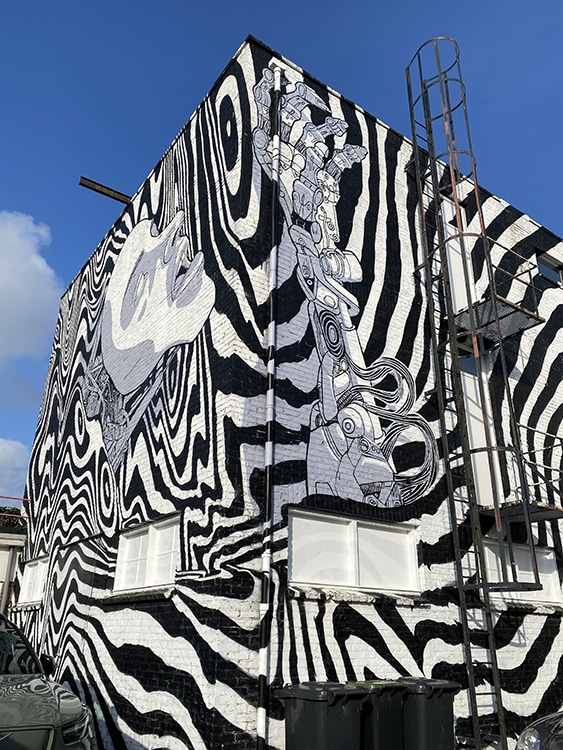 A little further along the rail track you will find the colossal mural by the Chilean artist INTI, who draws inspiration for his work from all things Chilean: the Incas, the tribesmen, the peasants, the Catholics and the revolutionaries. The icon-like figure in Heerlen seems serene at first glance, but also radiates a strange, mutant-like creepiness.

She wears a light veil with a crown of pink roses around her head, while her cloak and dress have a camouflage print and patterned belt. What does this lady with burning heart, peace branch and book on her lap want the people of Heerlen actually tell you exactly?

The interpretations are different, but the association with religion (book), peace (olive branch) and violence (pattern belt) is obvious. For INTI these are references to the Chilean past that are interwoven with other symbols from South American culture.

Heerlen not only offers plenty of space large murals, but also some smaller Street Art; the kind that hide a bit from the unsuspecting passer-by. To discover these works you have to move through the city like a true Sherlock Holmes, your imaginary magnifying glass in hand.

As transparent as they are, Spencer Little's tiny figures are easy to miss when moving from A to B. The intricate works of art, often made of one continuous piece of steel wire and made with needle-nose pliers, are attached high above the pavement, usually to a lamppost or traffic sign. 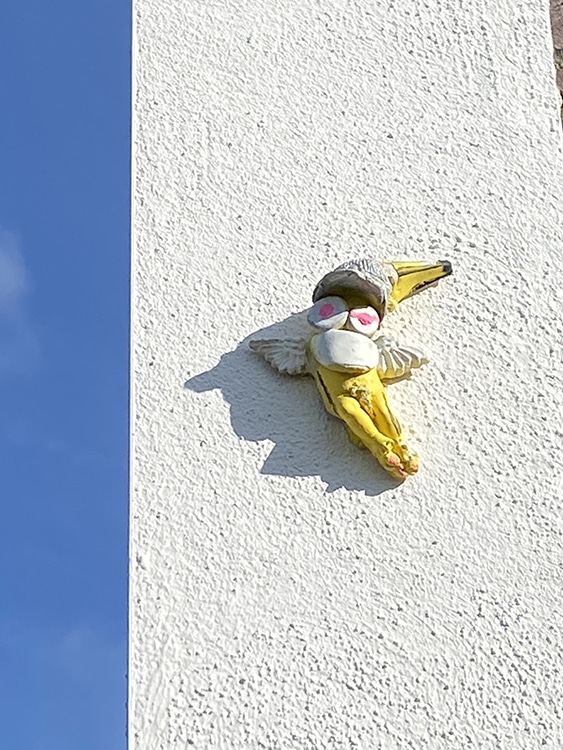 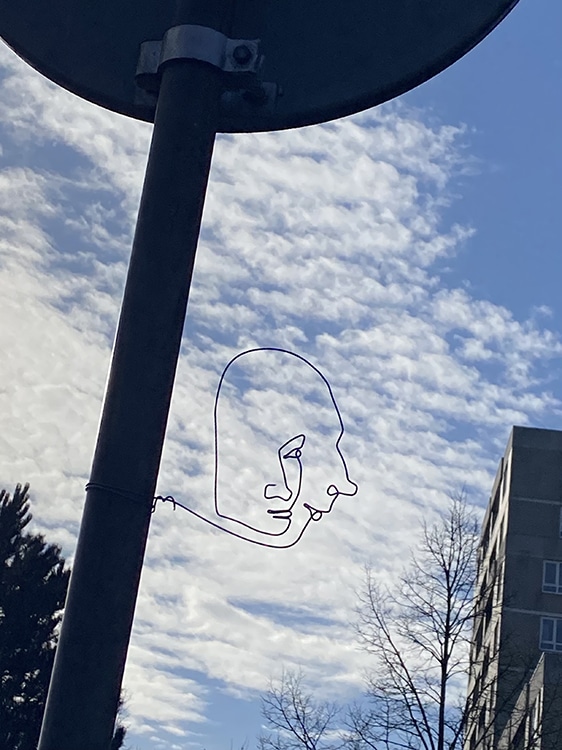 For one job you have to look up and for the other you have to look back towards the curb. Zuko75's vinyl paste-ups generally hang quite high around'artlifting' to counteract. The beautiful picture, with a signature in Baudot code – the orange dots, shows a refined stencil on which the beautiful silhouette of a woman looms up from the dark.

You have to realize that there is quite a bit of time in making such a work and it would be a shame if it is only there for a short time. The winged banana a little further in the center, which originated from a collaboration between Dr. Morph and Bazzagramz (aka 'London's finest banana'), is also high above reach.

A little more at eye level, a relief of 7Emplo can be seen in various places in the city. The colorful totems are reminiscent of ancient civilizations and each piece, first made in clay and then cast in concrete, is painted by hand. You literally have to bow to JAUNE.

The little garbage men of this one Belgian artist, can be found in many places in Heerlen and attract attention with their brightly colored work suits. JAUNE knows from personal experience something that rarely happens with real garbage collectors. The invisibility of people in this profession is striking, you are on the street a lot but nobody greets or chats. 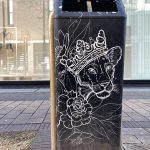 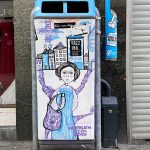 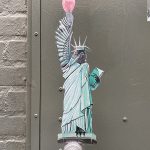 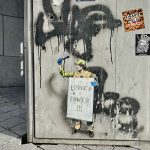 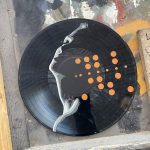 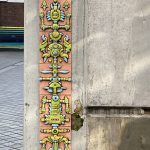 As mentioned, the municipality of Heerlen is doing a lot to improve the streetscape. 'Stichting Street Art' (formerly 'Heerlen Murals'), 'Street Art Heerlen' (platform of Sanne Gijsbers also developer of the Street Art/city guide 'ENNE') and several other initiatives have made Heerlen into a large open-air museum.

They offer both national and international artists, as well as up-and-coming talent, the opportunity to reach a large audience. For example, that new talent recently transformed 18 street trash cans into 'art containers', which give passers-by something extra to look at.

Street art of a different scale

Finally, back to the big, less transient work. To begin with, the colossal wall of Tamara Djurovic aka Hyuro just outside the center. This artist died last November much too young from the effects of a debilitating illness. Her paintings were and are invariably of unprecedented quality and her death makes you realize once again that these beautiful works of art, which we all enjoy so much, are made by people of flesh and blood. 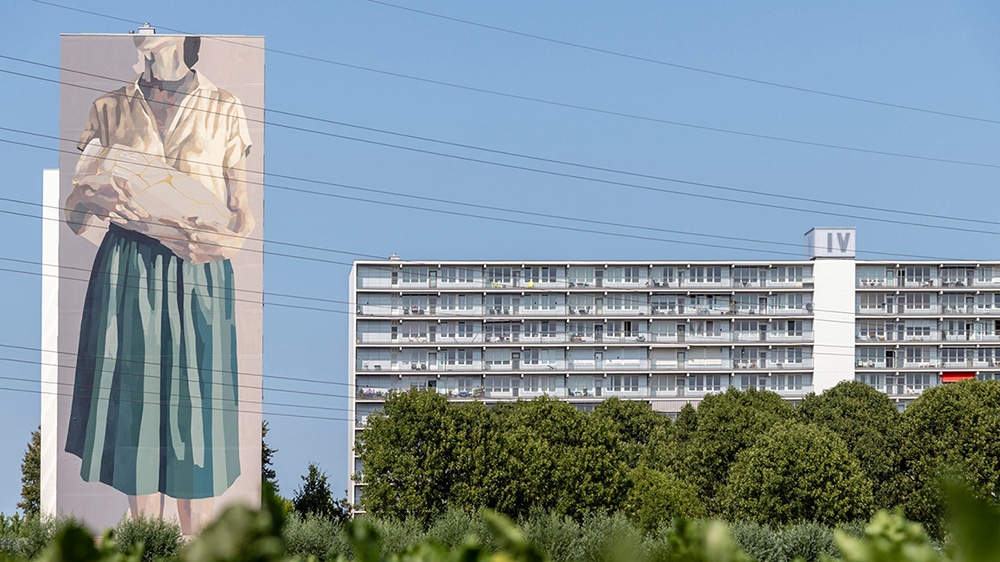 The transience of man and the temporality of Street Art generally coincide, but precisely huge murals make their creators a little bit immortal. The legacy of these imposing works increases the eternal value and thus the status of the artist. Hyuro has unfortunately extended the list of great muralists from the past – such as Michelangelo, Titian, Correggio, Rubens, Matisse and Haring – prematurely.

It is precisely because of this transience that it is important to keep dreaming and not to let the little things that life offers pass unnoticed. The Polish artist Magdalena Karol wants to convey this message to the viewer with her work. 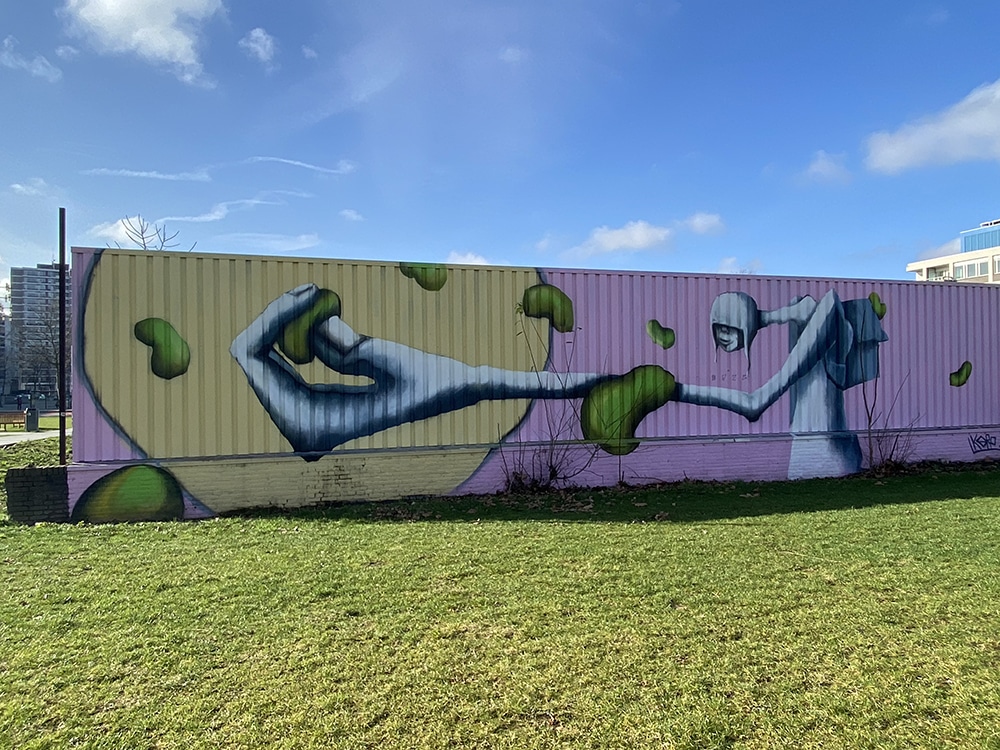 It is a given that the world of Street Art is a reflection of life and is therefore so appealing. The visual language sometimes evokes a tear, sometimes a laugh and often amazement and admiration. the vast wall painting van Karol is located in the center of Heerlen. In the performance you see a human-like figure with enormous long arms and large hands. It looks curiously at a small green bean – the source of new life.

And so it will be the Street Art and artists also perish. Old heroes and heroines will be remembered and honored and eventually make room for new generations, who in turn will depict their own environment in their own style. Returning to the questions at the beginning of this piece: Does the nurse take off her face mask, is it over? Or is this just the beginning? It's hard to say, because nothing is as unpredictable as life itself – as you've been able to experience for yourself over the past year.

Not yet finished reading about street art? Check out this one too blog messages: Street art in the neighborhoods of Utrecht of The origin of graffiti in Amsterdam.

When you travel to Heerlen, a visit to the Visit South Limburg Experience Heerlen-Parkstad not missing. At this tourist office you will find extensive information, maps and guides, souvenirs and regional products and you can make reservations or buy entrance tickets. You can also create your own street art artwork on the permanent digital graffiti wall and then admire your artwork through a projection on a large wall in the building. Imagine yourself a real street artist for a while and visit the Visit South Limburg Experience Heerlen-Parkstad at Spoorplein 40 in Heerlen.

Do you have any questions or do you want to know more about street art?

Do you have questions, comments or suggestions about graffiti and street art in Heerlen? Do you want to know more about the history, book a street art tour or commission street art? Please feel free to contact one of our specialists.

Street art in the neighborhoods of Utrecht

Graffitinetwerk specializes in all conceivable forms of graffiti, street art and guerrilla marketing. Since 1990 we have been providing team building workshops and creative (side) entertainment, colorful murals, (3d) street paintings, live art and high-profile street advertising campaigns throughout Europe.
Take a look at us for inspiration portfolio and for information, advice or a quotation without obligation Contact us.

By customers & partners Graffitinetwerk and rated its services with a 9,0 (804 reviews).