Street art in the neighborhoods of Utrecht

Street art and murals in the neighborhoods of Utrecht

Who of street art can indulge in Utrecht. From large colorful murals to graffiti-covered doors, prominent names and local color - Street Art and street culture is clearly present in 030. After legendary bombers like Mellie, Shave and Reaze, the graffiti scene nowadays looks completely different. To give you a glimpse into this world, I will take you to a number of different areas of the city.

It cannot be denied that Utrecht is not only a lively city, but also a large street museum. Street art is playing an increasingly prominent role in the 030 street scene.

To begin with, of course, the famous historic city center of Utrecht. In addition to the legal graffiti walls designated by the municipality (more about this later), there are a number of places in the center where many taggers have formed a true graffiti hot spot. 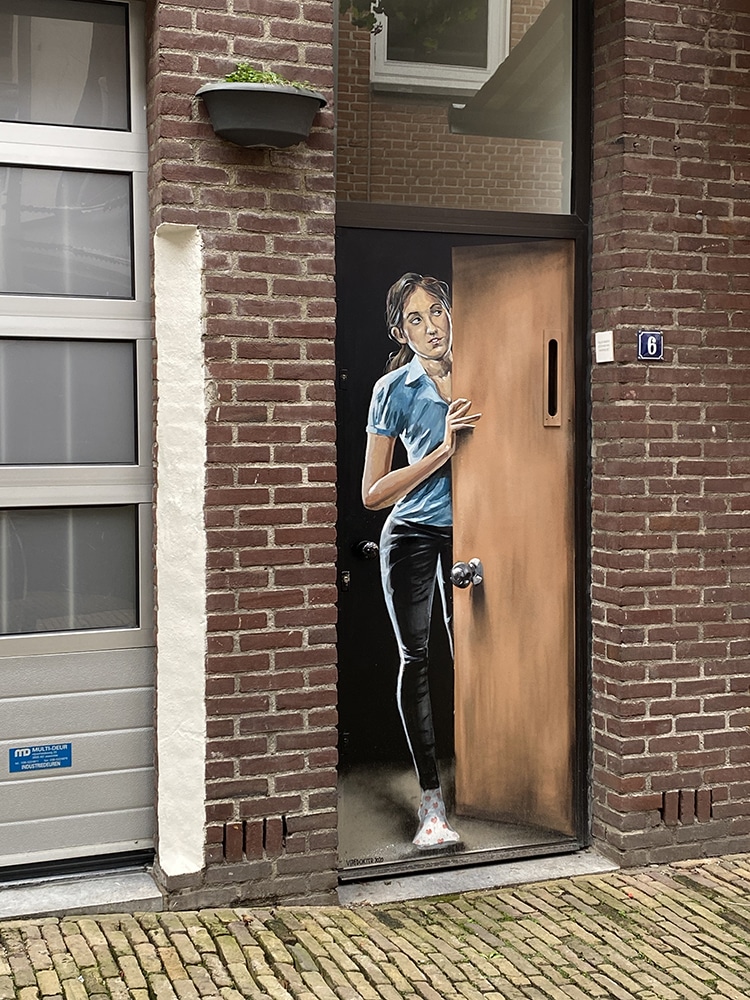 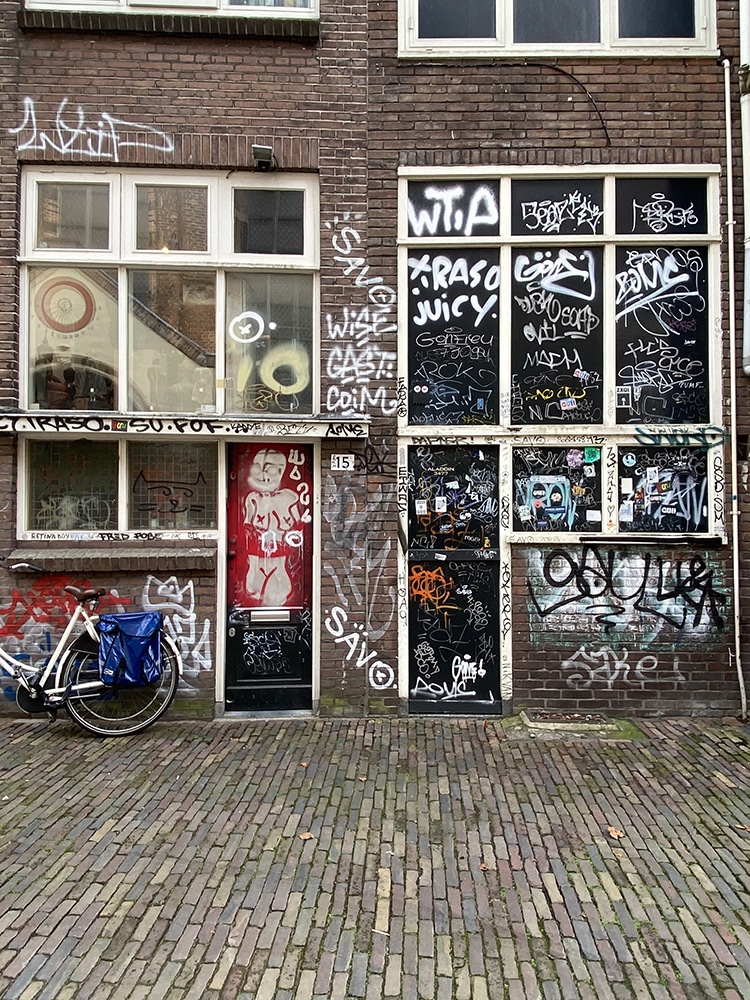 Graffiti and street art in the center of Utrecht

It is quite interesting to think about places like this and to wonder which world is hiding behind them. The main goal of tagging is to have a visible presence in the street scene in as many places as possible. In addition, the tagger strives for recognition as a 'productive writer' within the scene: the more fertile the better.

And finally, tagging is about gathering power; where and how does the graffiti writer personal claims on all its surfaces. You should not underestimate the cultural value of these types of plastered places, as they provide a wealth of information about the groups within society that oppose the prevailing values ​​of the dominant popular culture.

In addition to the artistic value of the 'writing style', the thematic content of graffiti can be an excellent tool to gain insight into the behavior, attitudes and social processes of certain social subcultures. Whether these places in Utrecht also provide such insights?

Yes, but to get a good picture of them you have to 'follow' them for a longer period of time, record them on images and analyze them carefully, because they are a dynamic whole that constantly challenges the normative values ​​of popular culture.

If you walk a little further away from the center, there is a good chance that you have illegally introduced an employee of the municipality graffiti see delete. The kitten that is 'treated' in the picture below is a Utrecht creature that seems to feel very much at home in the city, both in the center and beyond. 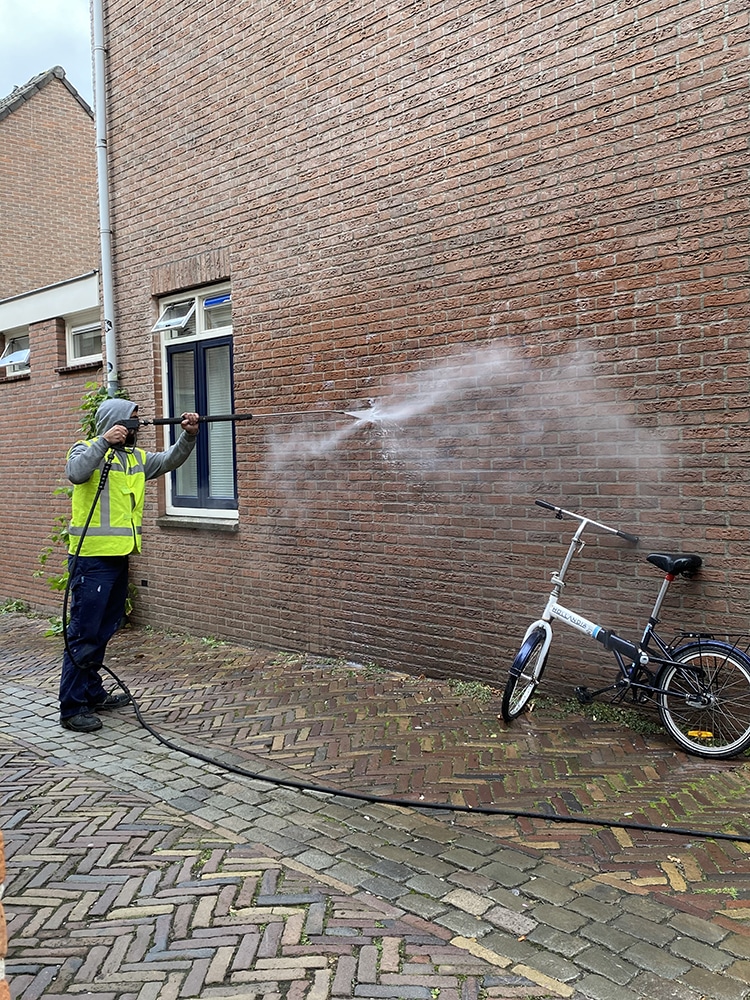 Besides graffiti is also sticker art well represented in the city center. A striking feature is the brightly colored 'BLACK LIVES MATTER' sticker designed by the Utrecht (tattoo) artist WIMSWIM. The committed sticker, with the additional message 'MAKE IT STICK', could be ordered for free through her Instagram account and ultimately led to many parcels sent home and abroad.

The subsequent collaboration with artist TOMMES resulted in a beautiful wall at the NDSM wharf in Amsterdam. The powerful image that has emerged shows the stylized design of WIMSWIM in combination with a realistic portrait made by TOMMES. 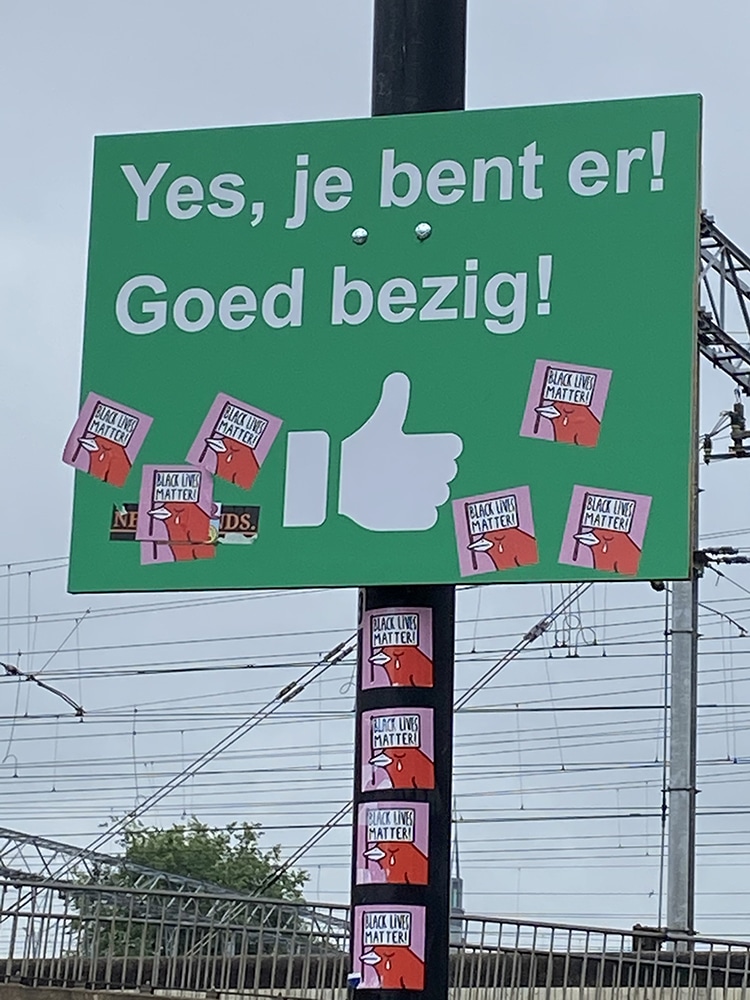 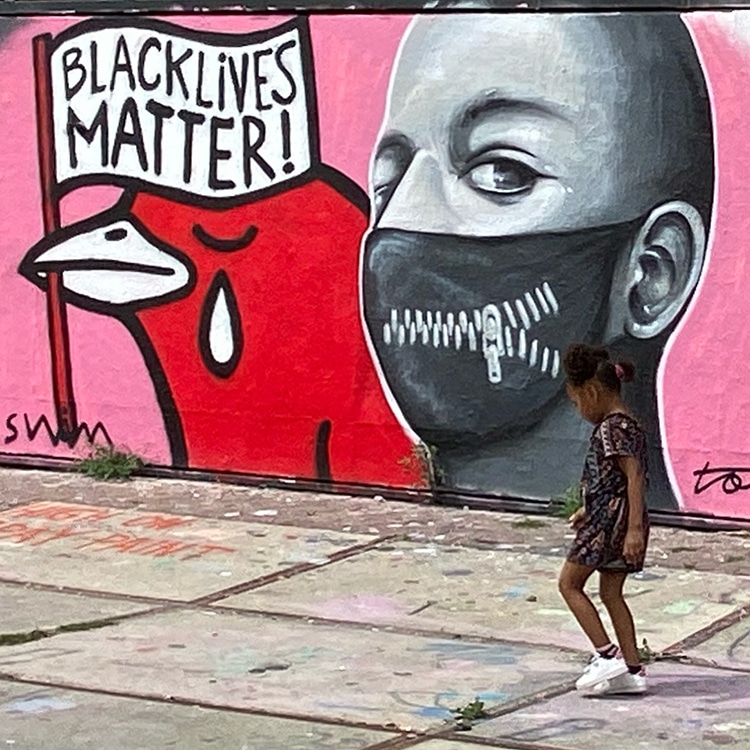 Tommes and Wimswim at the NDSM wharf in Amsterdam @ccartlover

At the back of the Utrecht district of Lombok

As a street art and graffiti spotter you walk a bit and not always through the most beautiful neighborhoods of a city. Yet that makes 'the work' interesting. You leave the beaten track and thus increase your view of a city and society as a whole.

On the way to the 'Googley eyes' wall painting from JanisDeMan I first walk through the pleasant Kanaalstraat, but when I get closer to the destination, the neighborhood becomes more and more quiet and gray. This area is a collection of former workers' flats in the shadow of the Douwe Egberts coffee roaster.

According to the municipality of Utrecht they no longer meet the requirements of modern times. The contrast with the cheerful mural is great and that's what it's all about. The district is nominated for demolition, but until the demolition hammer takes over, you can of course still admire the disarming mural.

When you walk back to the center via Laan van Nieuw Guinea, you will pass a stencil of a Marilyn Monroe in pepperoni pizza bandit mask, tagged with Freeksells' signature 'HEY'. 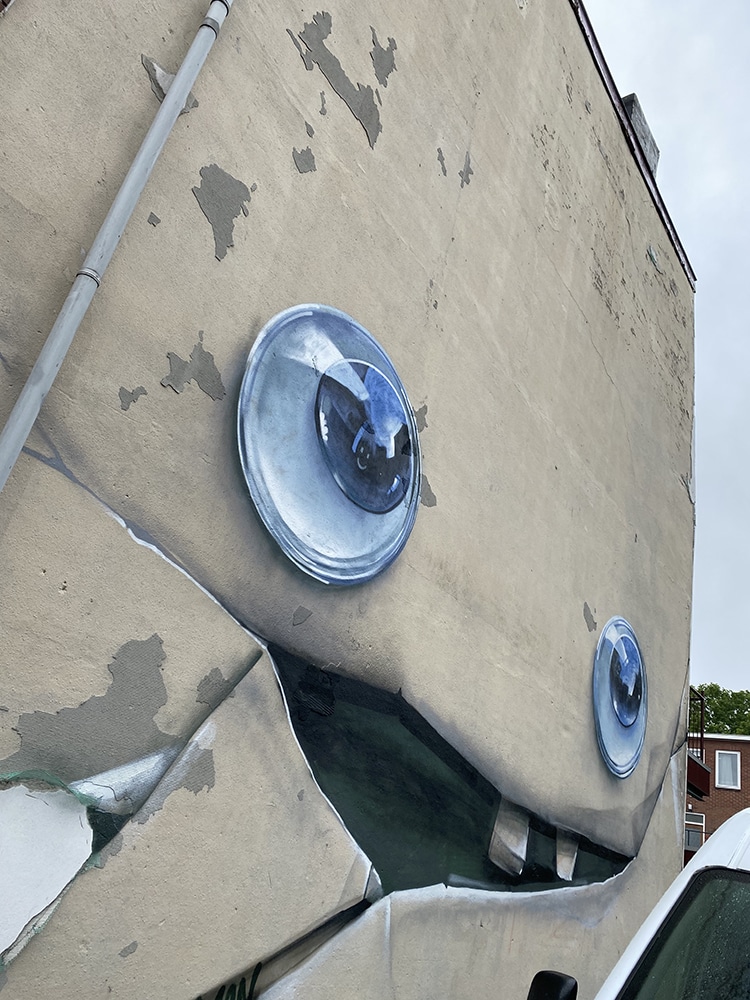 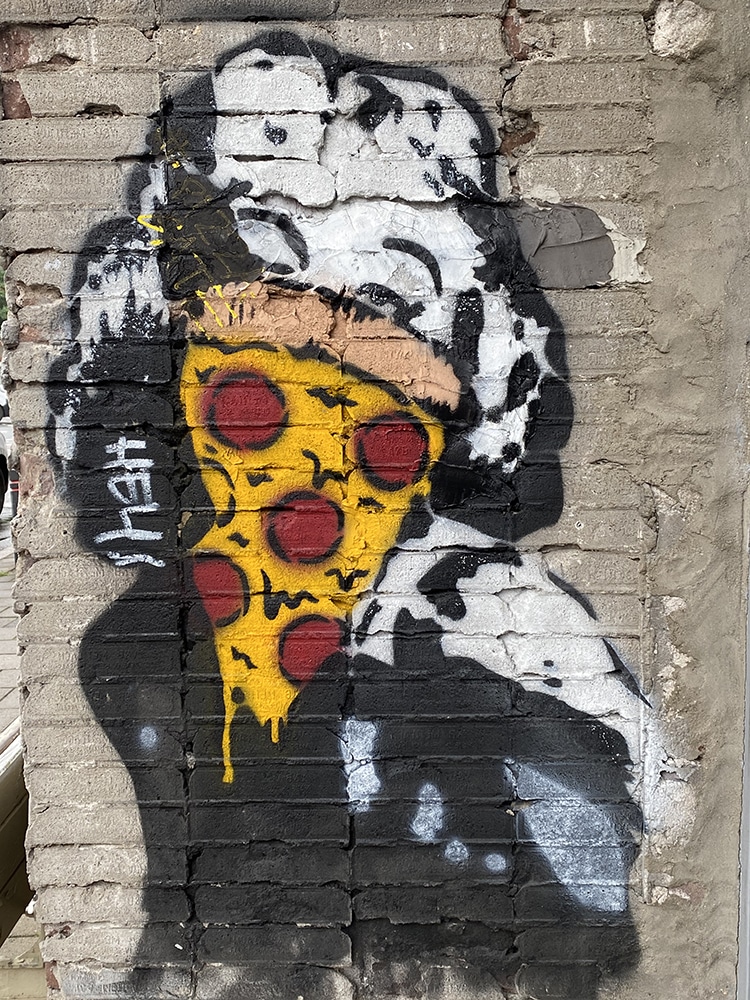 Trompe l'oeils in the Bird Area

Fittingly, many murals with a bird theme can be found in the Vogelenbuurt. In the heart of this neighborhood you will find, among other things, the oldest murals in the city.

Utrecht was there early: the murals in the vicinity of the Adelaarstraat date from the end of the 70s and the beginning of the 80s. The artists Anna P. Boer and the now deceased Hans van der Plas were with them trompe-l'oeils way ahead of their time.

Van der Plas' triptych depicts, among other things, a facade on which a balcony and a number of flying pigeons are painted. The exaggerated shadow effect increases the illusion of the composition.

And on the corner of Nieuwe Koekoekstraat and Johannes de Bekastraat, an artistically landscaped local resident has the optical illusion of an open door. The beautiful neighborhood has many pearls, which are all within walking distance of each other. 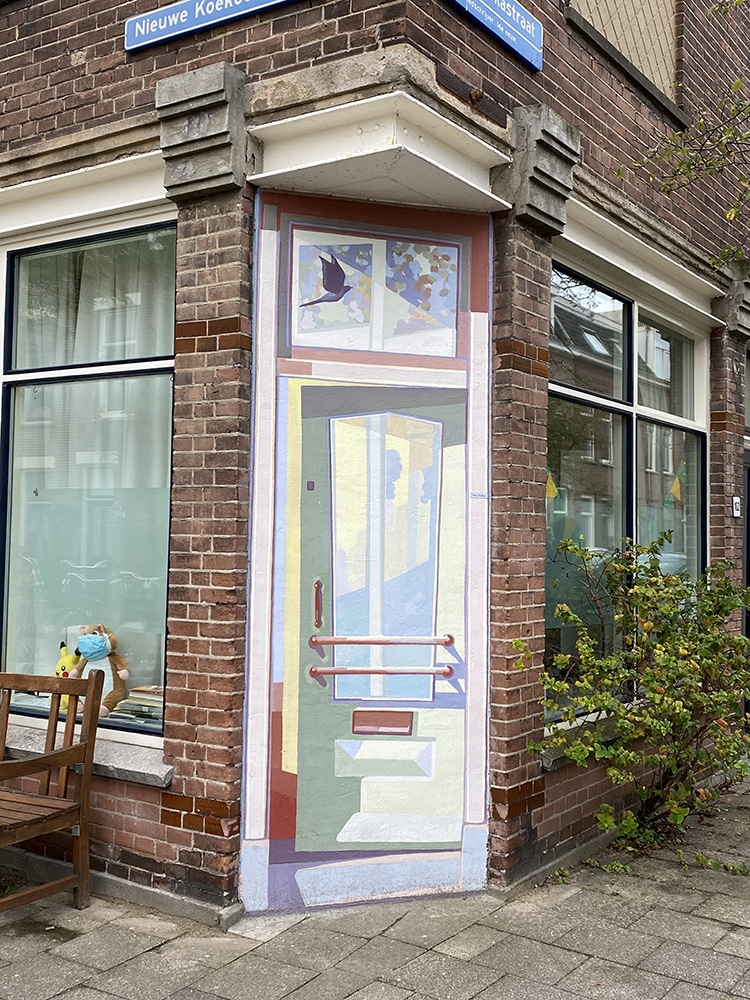 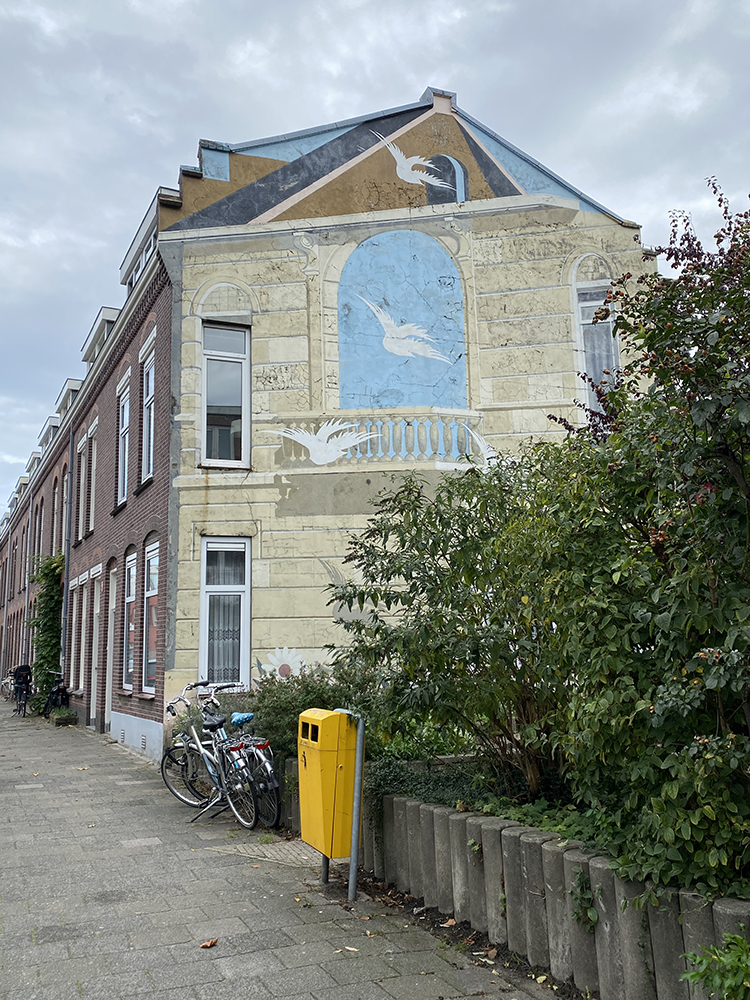 Street art on the Amsterdamse Straatweg

The Amsterdamse Straatweg runs through various neighborhoods of the city, including Pijlsweerd and the 2de Daalsebuurt. At the beginning of the street you are immediately welcomed by the enormous eye-catcher of JanisDeMan.

The wall, which has passed through the street-art artist is painted, depicts a kind of globe with buildings that can all be found on the Straatweg. The twenty-four different facades were supplied by the local residents, reflecting their involvement in the project initiated by the municipality.

The same goes for the beautiful Bookcase just down the street, which was also made by JanisDeman (with help from Deef Feed). In the bookcase we see a varied selection of books in different languages, contributed by local residents. De Verfdokter has left his mark in the adjacent Tweede Daalsedijk.

The neighborhood was purpose-built for railway workers and you can see this in some large ones murals back. Various train models are depicted in a narrative setting. 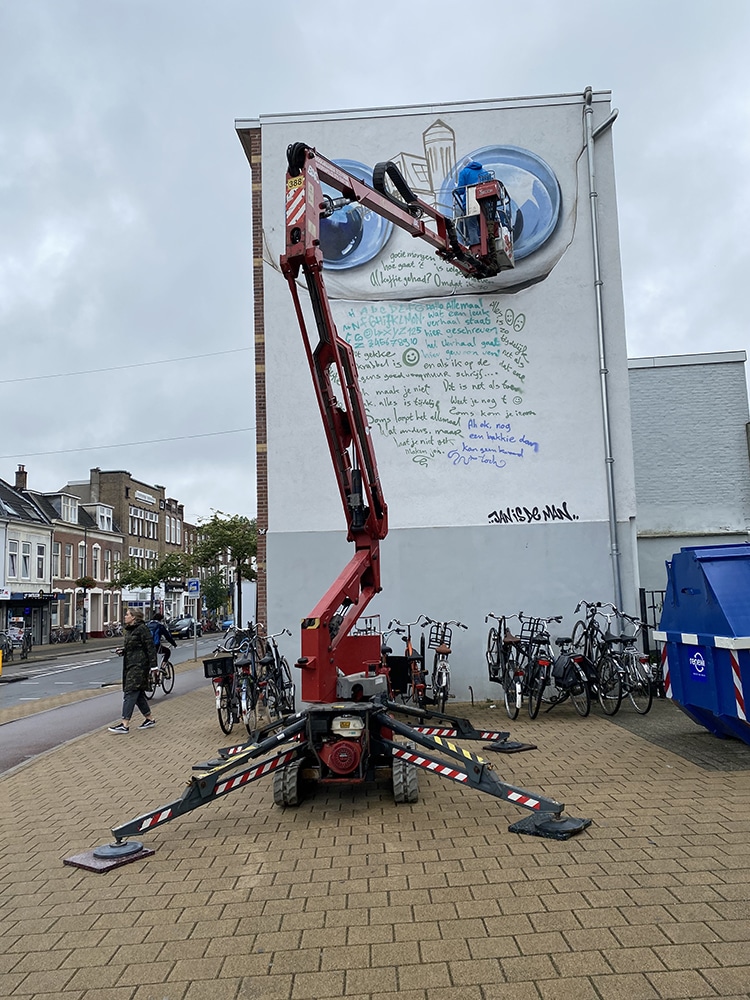 The colorful art of Berlin Square

The story about Utrecht is incomplete without KBTR, Erwtje and Deef Feed (already mentioned above); three artists who are inextricably linked to the city and all three have their own unique style. You come across them along the track or within the built-up area, and if you want to spot them all three at the same time, your chances are the best. Berlin Square. This tolerance place for Street Art and graffiti is located in the Leidsche Rijn district. 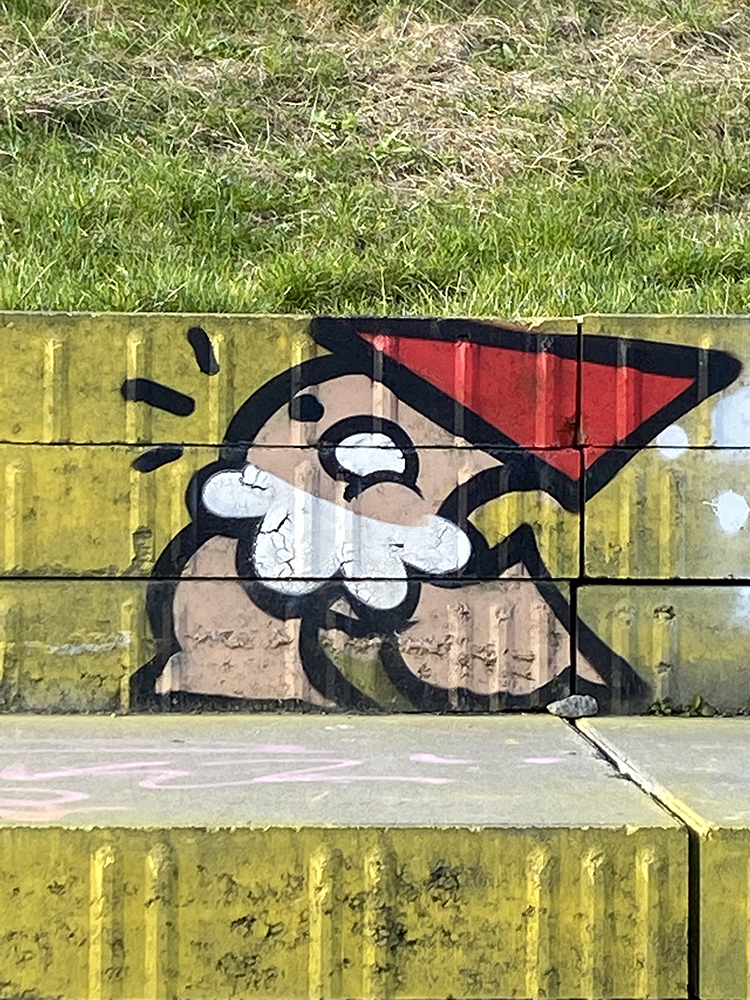 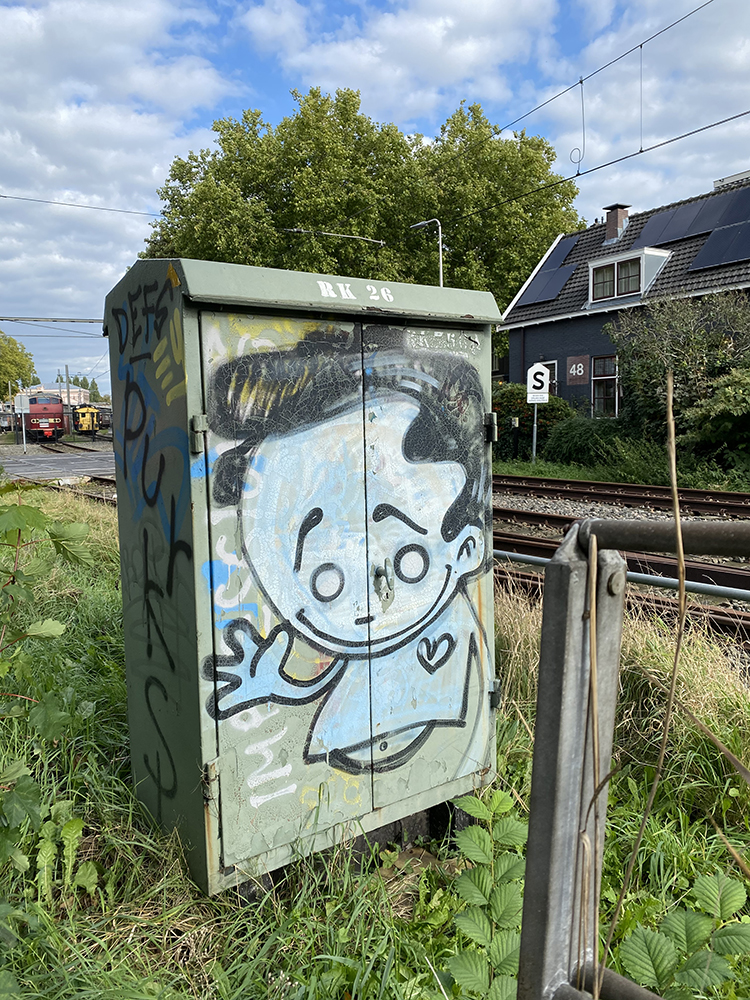 The paintings that Erwtje left behind go further than his characteristic figures and form true nocturnes - paintings that depict a nightly scene, with the emphasis on the special light. Because of the extreme chiaroscuro, the warm tones and the special atmosphere, these works evoke the Netherlands' most famous' night painter 'Rembrandt - even though Erwtje's subjects are contemporary and refer to the graffiti culture.

The deformed creations of Deef Feed seem straight out of a nightmare. The shiny, often slimy, wrinkled creatures, sometimes with gruesome (yellow) teeth, strangely enough also have something friendly or perhaps something tragic with their glassy eyes. You see the beauty of the art and the darkness of the subject merge here, as it were. A creature made so beautifully cannot be all dark in nature, right? 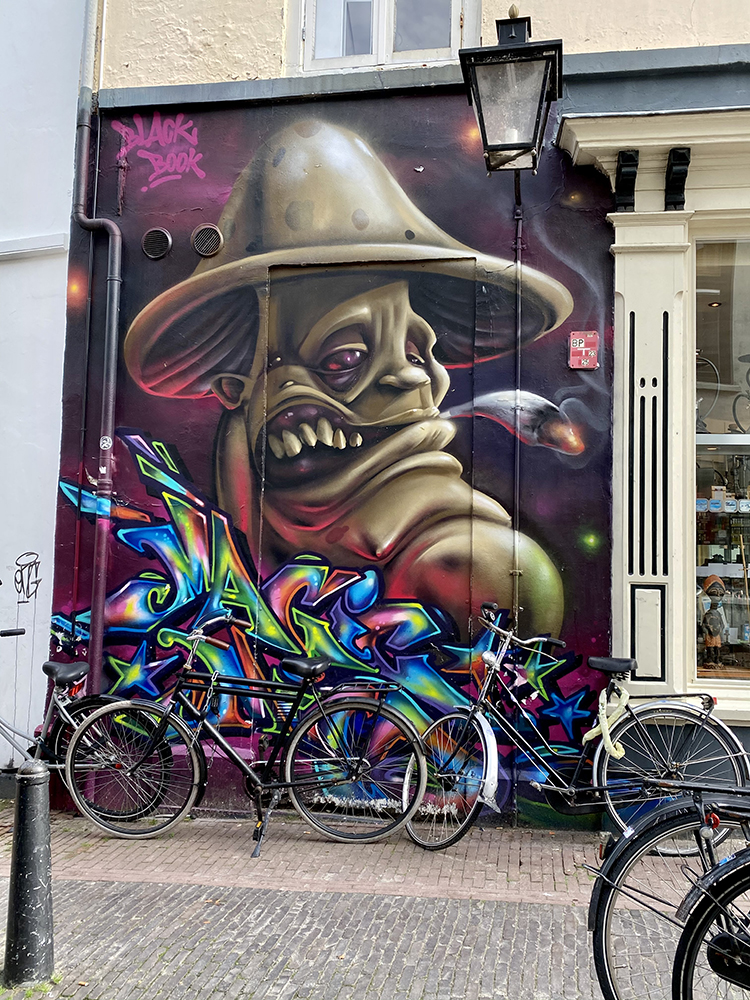 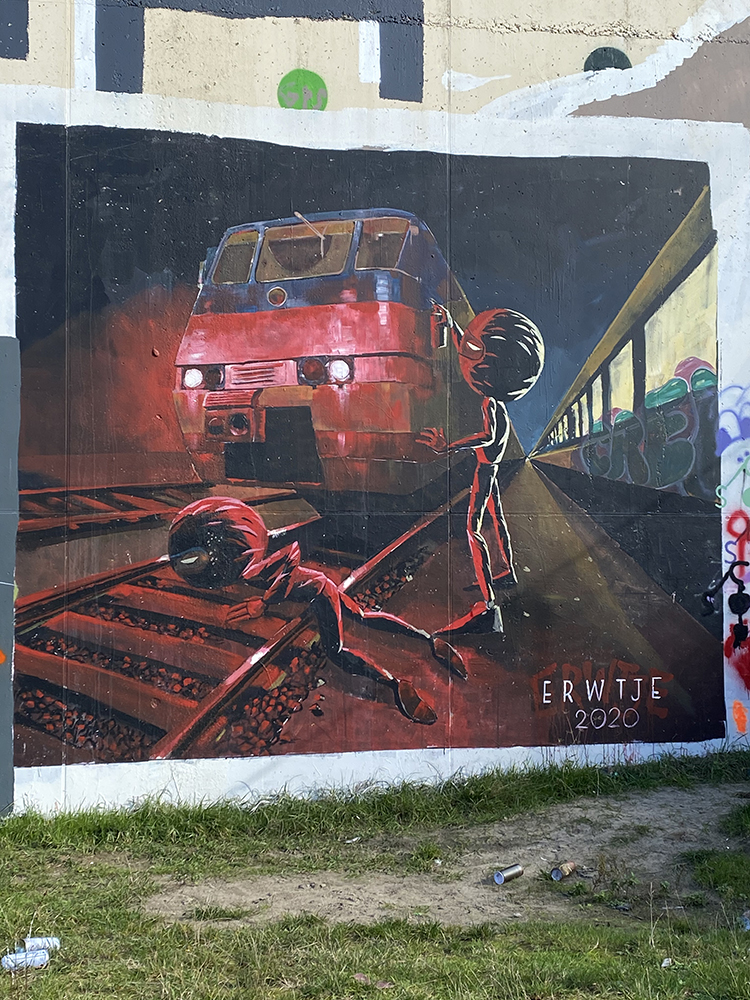 When you see the KBTR, you will definitely get a smile on your face. The little creature with a pointed hat and a sense of humor is often grumpy, with his little fist in the air, is busy with all kinds of things, but is especially pleasantly present in the city and around the railway. The KBTR establishes a connection with its environment and thus speaks to everyone who sees it.

Also international muralists left true works of art in Utrecht. A good example is the 'Mirror of Return' by the Italian Mattia Campo Dall'Orto on the side wing of a nursing home on Saffierlaan. The mural depicts 'young and old' and refers to the experiment to have the house occupied by both young people and old people. 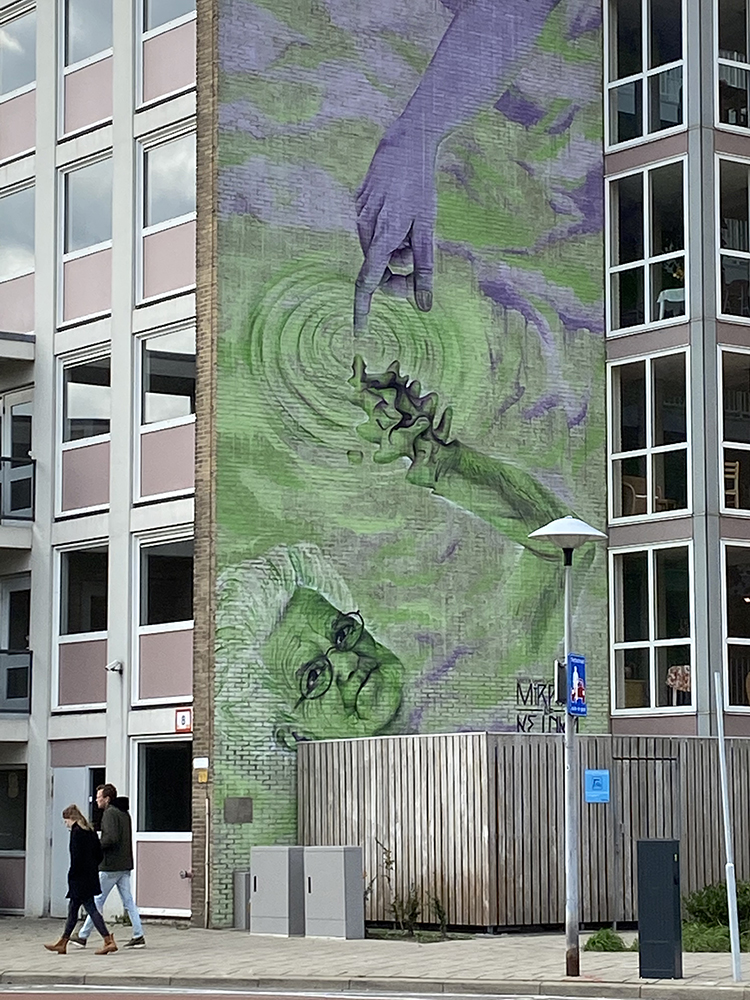 The work of Joana Philine Butschenk from Germany can be seen in Nobelstraat. The floating hippo, surrounded by blue water and some colorful fish, adorns the garage door of the former printing company of the Utrechtsch Nieuwsblad.

And finally it stencil by the Spanish artist EZBAI. After some research it can be determined that it is a portrait of one Roselli alias 'Handsome Johnny'. Who is this man? As his alias suggests, Mr. "Handsome Johnny" Roselli was a handsome American gangster with Italian roots. 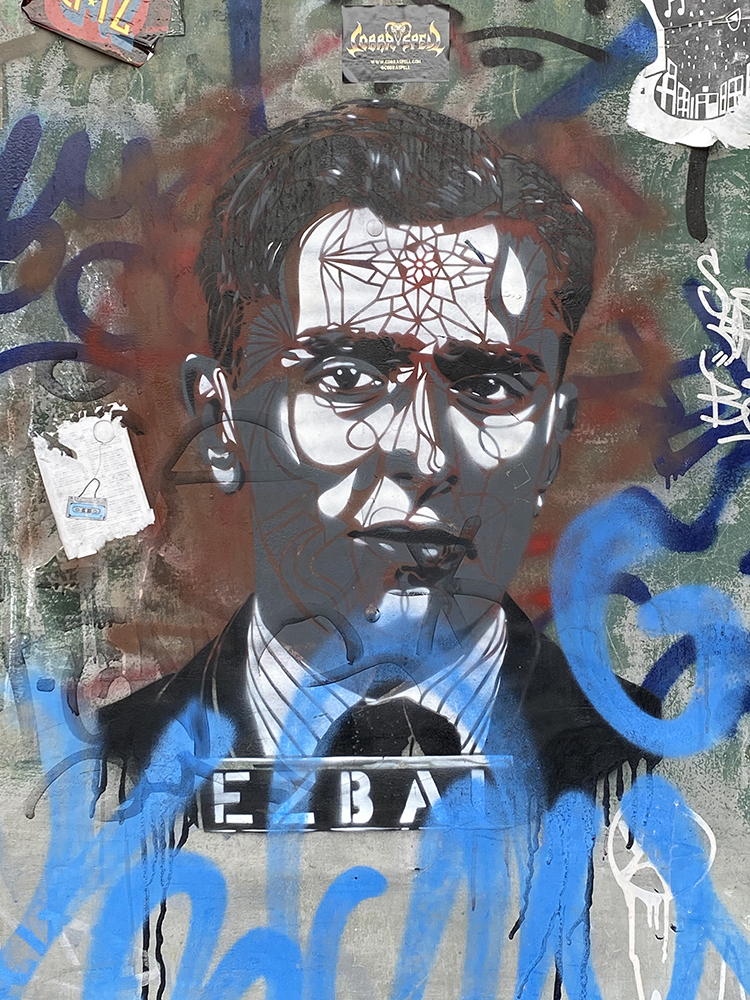 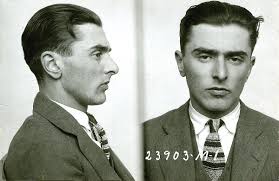 In the early 1963s, he was recruited by the CIA to assassinate Cuban leader Fidel Castro. The FBI and many conspiracy theorists believe he also played an important role in the assassination of US President John F. Kennedy (XNUMX).

This street artist has devoted a whole series of stencils to criminals with a certain cult status, such as Pablo Escobar, Al Capone, Charles 'Lucky' Luciano and the above-mentioned handsome Johnny. The stencil technique is ideal for using portraits of a famous or infamous person. The medium is very direct and leaves little room for painterly finesse, which quickly creates a strong and appealing image with iconic value.

The Utrecht Street Art and graffiti scene is on the move and full of contrasts. The municipality is also doing its bit by making the streets safer and friendlier with art, but at the same time it is also tempted to play a cat and mouse game around the application of illegal graffiti and its removal. 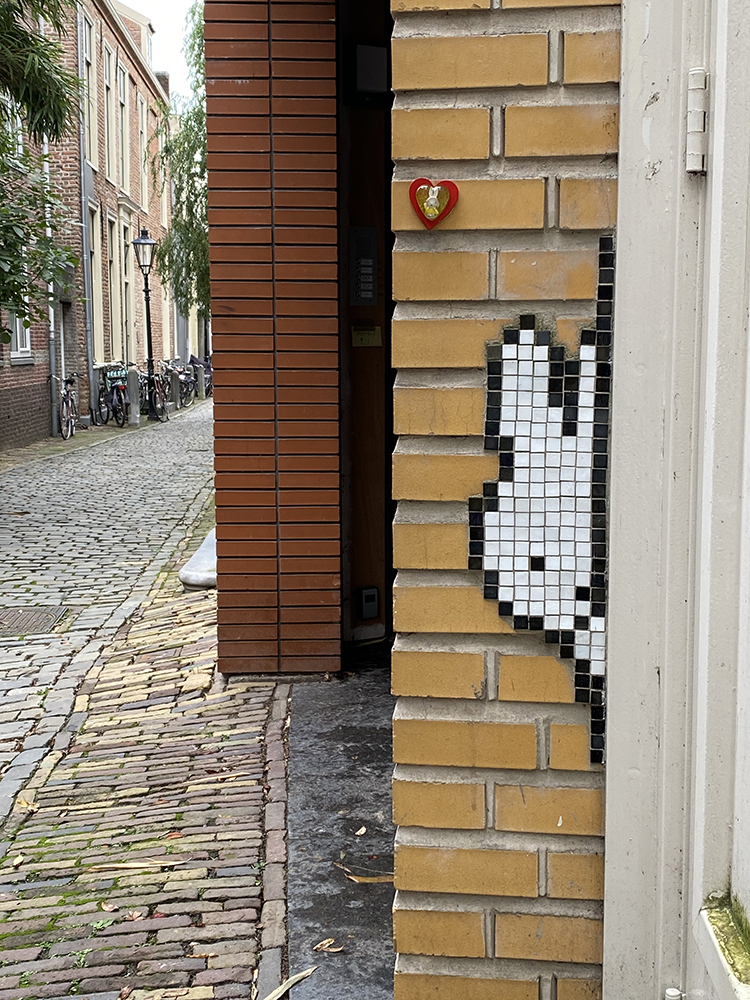 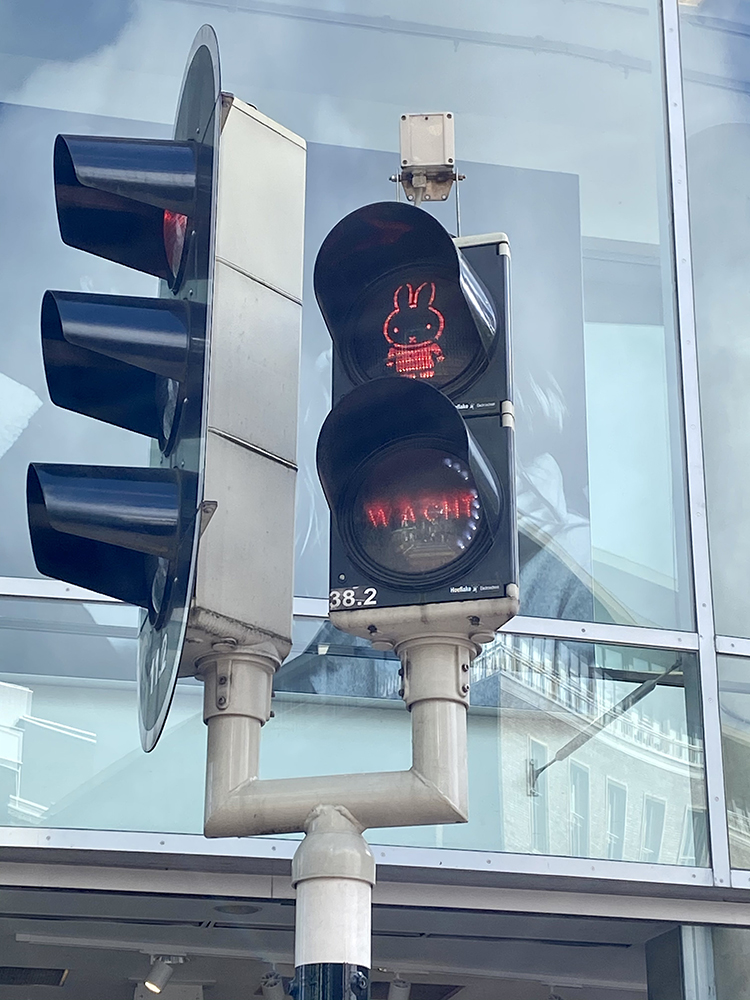 It cannot be denied that Utrecht is not only a living big city, but also a large museum. Over the years, places have emerged and disappeared, and anonymous and well-known artists have been able to provide the city with language and images to their heart's content - on commission and incognito.

Not yet finished reading about street art? Check out this one too blog messages: The murals of Heerlen as a large open-air museum, The origin of graffiti in Amsterdam of Street Art in Rotterdam, from the past to the present.

Do you have any questions or would you like to know more about street art?

Do you have questions, comments or suggestions about graffiti and street art in Utrecht? Do you want to know more about the history, have street art made on commission or get started yourself during a graffiti workshop in Utrecht? Please feel free to contact one of our specialists.

Graffitinetwerk specializes in all conceivable forms of graffiti, street art and guerrilla marketing. Since 1990 we have been providing team building workshops and creative (side) entertainment, colorful murals, (3d) street paintings, live art and high-profile street advertising campaigns throughout Europe.
Take a look at us for inspiration portfolio and for information, advice or a quotation without obligation contact us.

By customers & partners Graffitinetwerk and rated its services with a 9,1 (820 reviews).